Discussing what President Donald Trump’s proposed infrastructure bill will include has almost become a full- time job in itself of late. It has certainly played a huge part in his ultimately successful campaign and beyond, with many continuing to wait on tenterhooks to see what direction this new federal government is going to take.

Since Trump’s inauguration at the beginning of the year, there has been much to-ing and fro-ing around the so-called $1trn bill coming out of the White House, but – as always – the devil will be in the detail.

The problem with this administration so far, however, is that there has tended to be very little detail and far too much hot air, making attempts to second guess Trump’s next move quite tricky beyond the soundbites around tax reform and mystery P3 projects.

One area where there is bipartisan agreement in an increasingly politically divided country, is the major need for federal action to address the concerning standard of infrastructure in the US. Trump has tuned into that concern and will hopefully now move to deliver a long-term plan. And with the Senate Democrats also pushing a different $1trn bill, the need to act has never been clearer.

Quite what role these will have in the development of P3s is another debate. The exact purpose of the feds in growing a pipeline of deals is a complex one, hence the importance of the real intricacies of Trump’s plans.

“Our chances are strong this session”

After all, it is a known fact that state level procurement is what is
likely to drive US P3s going forward. This leaves a grey area as to where the federal government can have the biggest impact.

“It is not enough to simply talk about a commitment, we need to know the detail and what exactly will be coming from Washington,” says one leading investor. “The federal government is increasingly being seen as a resource, but you cannot incentivize activity without real proposals.”

“Trump’s proposals are broadly positive,” adds International Public Partnerships (INPP) director Giles Frost. “But I think while no one denies the need for more infrastructure in the US and the lack of investment of the last few years, when you drill down to it, infrastructure remains the responsibility mainly of states and cities. Therefore Trump’s ability to influence is somewhat limited.”

With the debate about federal proposals raging, many states are continuing to soldier on with their own plans, highlighting that the federal activity is just one facet of their fledgling programs. For many regional agencies, additional funding is helpful, but will not ultimately determine how they procure their infrastructure.

“The federal proposals that we have been hearing about are not really on our radar,” says LA Metro chief innovation officer Joshua Schank. “This is because we have so much to deal with on our own pipeline.

“We are a regional agency for LA County and we plan on building and maintaining transportation throughout the region for 88 cities and 10 million people, so when we have got $100bn that we need to spend e effectively and the federal government is talking about potentially tweaking some of the rules around P3, that is wonderful and we would support that, but we are focused on what we have to do right now.”

Jose Galan, director of the real estate development division in the Internal Services Division of Miami-Dade County, agrees. “We have to just stay focused on what we need to do. The projects we are focusing on now are the ones we can do on our own, regardless of what happens at federal level.”

Traditionally, the most successful programs have been ones that provide incentives and means for states and localities to do the things that they feel they need to be doing – TIFIA being a clear example of this.

The big question then is whether the federal government under Trump will move away from being seen as a resource or facilitator and actually find a real way to capitalize on the potential of P3s and private investment in infrastructure.

While the world debates the impact that Trump may have in a number of areas, there is growing support within the industry for other avenues to kickstart pipelines – at whatever level that may be.

As the clock continues to tick on a wider federal proposal, there already exists a plan within Congress that could have demonstrable effects on the market should it gain the necessary traction to become law.

Namely, the proposals set forward by the Performance-Based Building Coalition (PBBC). The bill, known as the Public Buildings Renewal Act (S 326) in the Senate, sets out $5bn in private activity bonds (PABs) for public buildings such as schools, colleges, correctional facilities and courthouses. With the House version of the bill, known as HR 960, also in Congress, it represents a comprehensive plan of action from the industry.

After being introduced on February 7, the proposals have now been referred to the Senate Finance and the House Ways and Means Committees. The senate bill is sponsored by Senators Dean Heller of Nevada, Bill Nelson of Florida, Cory Gardner and Michael Bennet of Colorado and Bill Cassidy of Los Angeles. The House version is sponsored by Pennsylvania’s Mike Kelly.

According to the PBBC, to date almost all transportation P3s in the US have successfully accessed federal financing, with 75% taking advantage of PABs.

More than $36bn of transportation deals have therefore moved forward throughout the nation since 2008. This means that, all in all, these projects have enjoyed cost savings of up to $5bn due to the availability of the tax-exempt bonds and the lower interest rates they carry.

Under the Public Buildings Renewal Act, state and local governments would also have a chance to submit a detailed funding application to the Treasury Department. Should the department approve that allocation of funds, the funding sources would have to issue the bonds within two years. Any allocated funding that is not used during the two-year period would go back to the federal government.

The bipartisan support is almost unprecedented for such a proposal, reflecting the growing acknowledgment from within Congress of the potentially positive ramifications of the bill and its ability to harness the options for state and local governments to develop pipelines deeper than large transportation projects.

So, amid all the rhetoric from the Trump administration, it might just be that the feds have the answer right under their noses.

“Our bill will channel a new stream of P3 financing into local communities for the ultimate goal of restoring public infrastructure from coast to coast,” Kelly explained when the bill was introduced. “It will take advantage of private sector efficiency to create jobs and save taxpayer money by streamlining the delivery, design, and construction of these projects.

“This legislation became more urgent than ever for me a er I visited several of our district’s schools last year and saw the unacceptable damage up close. When public places like schools, hospitals, and court houses are allowed to crumble, the people they serve su er,
especially students.” 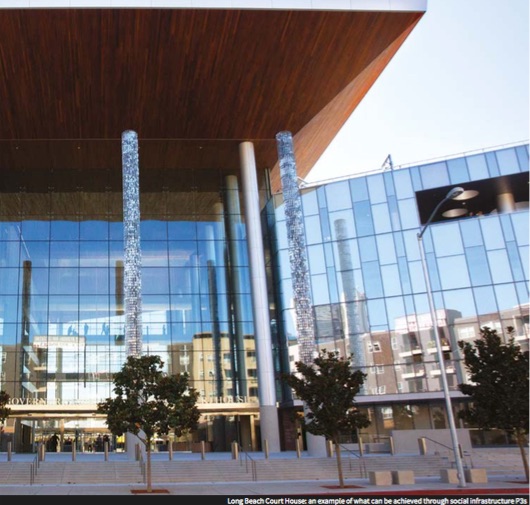 The goal of the PBBC is to now see its proposals added to the larger plans being touted by the feds, supplementing and adding another string to the bow of the country’s infrastructure overhaul, which so far seems overly geared to transportation. 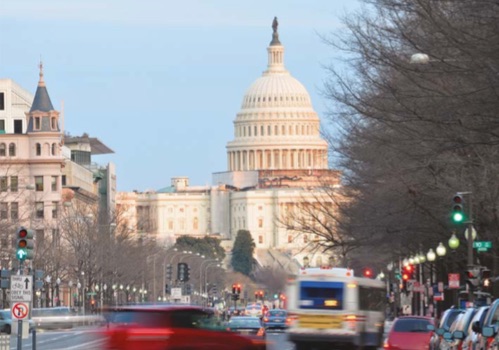 “If the president does put out an infrastructure bill then this would fit nicely in what he appears to be proposing, since his proposals have a bedrock of facilitating private investment in public infrastructure,” says PBBC founder and senior vice president and development director of Aecom Capital, Samara Barend.

“A bill like this could have trouble getting passed on its own as it is smaller than those usually passed in Congress, so the plan is to get it included in a major piece of legislation to get through. That is our strategy right now.”

The bill has now been socialized with top leaders of the administration and support is growing fast. On top of the existing support at congressional level, industry backing for the plans is almost universal, perhaps for obvious reasons. A er all, the evidence of the influence PABs have had on the transportation pipeline is palpable. Should the same playing field be afforded to social deals and the wider pipeline, it could be this that finally unlocks the potential of the US market.

“One of the things the federal government can really do to help this industry now is to enact the re-introduced legislation proposed by the PBBC,” says Dale Bonner, executive chairman of Plenary Concessions. “We have been pushing for years to be able to get private activity bonds used for public buildings and this legislation can do that, which could really open up the market.

“We are hopeful that this can be included as part of, or at least alongside, what is coming out of Washington, DC.”

However, one concern is that this is not the first time the PBBC has pushed this bill. Originally introduced in 2015, the organization had hoped to see the plans included in the Fixing America’s Surface Transportation Act (FAST) Act. But this was not to be.

Some sources have revealed that this was perhaps a reflection of a clash of interest between the P3 industry and what Congress felt was required to improve infrastructure for the wider nation. Alternatively, it could also be argued that this was continued evidence of the suspicion that surrounds the use of P3s in the US – highlighting the need for the ongoing education to demonstrate where the model can be effective.

Barend, though, is confident that this time could be different.

“I would argue that we now have more Ways and Means co-sponsors than any bill that has been introduced in this session,” she adds.

“A lot of this has been attributed to the fact that we have been able to show such a low score from the joint committee on taxation. Republicans and Democrats are inclined to support P3 but I think there tends to be opposition to bills that have high scores, as it appears that they will cost money.

“But since our bill has a negligible budget score  it has been extraordinarily helpful. Our chances are strong this session.”

The latest count shows that there are now 17 co-sponsors on both bills, supporting Barend’s view that 2017 could be the PBBC’s year. Having strong support on the committees of jurisdiction will help the plans to get included in the wider bill. The hope will then be that the lead sponsors are able to muscle the plans through.

As a result, Barend is calling on yet more industry support to get the initiative over the line. With the question so o en asked surrounding what the private sector can do to make its voice heard to further P3s, there finally now seems a genuine avenue for real change.

“We welcome anyone interested in the US social infrastructure P3 market to join us – be a participant, not a spectator,” urges Barend. “Now is the time for action from all of us. We need the help of all market participants to get this over the finish line.”